Don was born in 1924 and in the great depression he earned money for his family drawing colourful chalk drawings and telling humorous stories at company events and banquets.

He grew up working on a farm, enlisted and served in WWII and then got his Bachelor of Arts at the University of Toronto. He was awarded the gold medal for philosophy and was offered a position teaching literature but show Bizz called.

From the annual Spring Thaw show in Toronto Harron went oversees to write for BBC comedy and appeared in Several plays at London’s West End theatre district.  He returned to Canada as a regular at the Stratford Festival.

IN the 60’s he had many roles in television and appeared in many stage productions.  Stage productions as early as 1952 featured a character that changed Harron’s career.  Charlie Farquharson was a fictional rural character form Parry Sound, and he became a staple on the Peppiatt and Aylesworth creation Hee Haw.  Every week the broadcast from the fictitious KORN radio studios was watched by millions.

He was inducted into the CCHOF 2000 as well as being given the Order of Ontario.

Harron was invested with the Order of Canada in 1980 and in 2007 he was given the Lifetime achievement Award at the Gemini’s.  In 2010 he was inducted into the Canadian Comedy Hall of Fame. 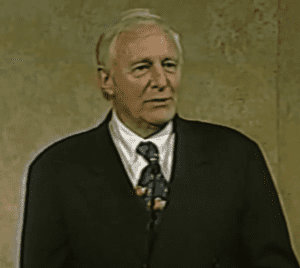