“I told him, ‘Julie! Don’t go!’” – the most famous line from Wayne and Shuster’s immortal Julius Caesar sketch, Rinse the Blood Off My Toga.

Johnny Wayne and Frank Shuster hold a special distinction in 20th Century entertainment.  They appeared on The Ed Sullivan Show more than any other act.  The show that featured the Beatles, the Rolling Stones, Elvis, George Carlin, Stiller & Meara and Louis Armstrong, was a second home for Canada’s premier comedy duo.

Their unique brand of parody and satire mixed history, literature and satire with social commentary and corn. They told smart jokes that everyone “got.”

John Louis Wayne and Frank Shuster met at Harbord Collegiate in Toronto, studied at the University of Toronto and wasted no time before they were writing and performing in Revue shows.

They never looked back.  From their first radio appearances giving helpful household hints in a comedic way, to their enlisted jobs in the Canadian Army Radio show, they built a steady and loyal following.

They toured across Canada to entertain and help sell Victory Bonds in a show that included Lois Maxwell, the first Miss Moneypenny, who appeared in 13 James Bond films. They followed the troops after D- day, lifting spirits while often having to contend with sniper fire and V-1 buzzbombs.

They started The RCA Victor radio show on CBC radio and soon Wayne and Shuster had a weekly audience of 3 million Canadians. Their success even landed them a TV job replacing a young Jack Lemmon on the variety series Toni Twin Time.

Mavor Moore approached them in 1952 to do a regular TV show, but they declined.  In 1954 they changed their minds, and their parodies were recognized south of the border.

Ed Sullivan loved the duo and their legendary sketch Rinse the Blood Off My Toga was performed on the show several times and its length (14 minutes) often forced other acts to cut their performances short.

In 1962, and again in 1963, they were ranked the top comedy act in America. They even produced Television specials for the BBC.  They were staples on Canadian TV and performed specials regularly from 1954- 1989 -35 years!

Curious Factoid: In 2000, an Australian musical group, “The Avalanches,” had a hit with Frontier Psychiatrist, a song inspired by the Wayne and Shuster sketch of the same name.  The song prominently featured Johnny Wayne saying, “That boy needs therapy”. 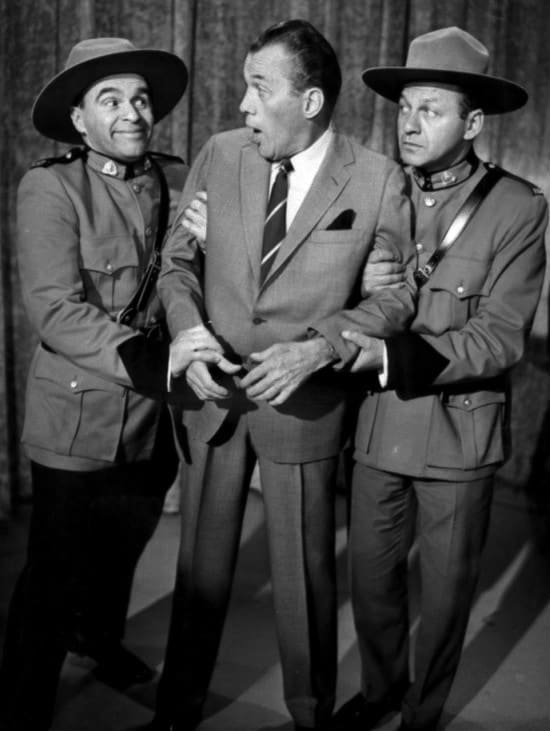