For 46 years, the Air Farce entertained Canadians with their political and social satire via shows in front of live audiences, on radio and television. Characters like hockey player Bobby Clobber (Dave Broadfoot), Mike from Canmore (John Morgan), the definitive Queen Elizabeth (Luba Goy) and impressions of the most famous faces of the day entertained Canadians for nearly half a century.

And then there was the Chicken Cannon!

The Air Farce received myriad honours in Canada including:

Between 1992 and 2019, New Year’s Eve belonged to the Air Farce and their specials were a must-see for millions of Canadians. 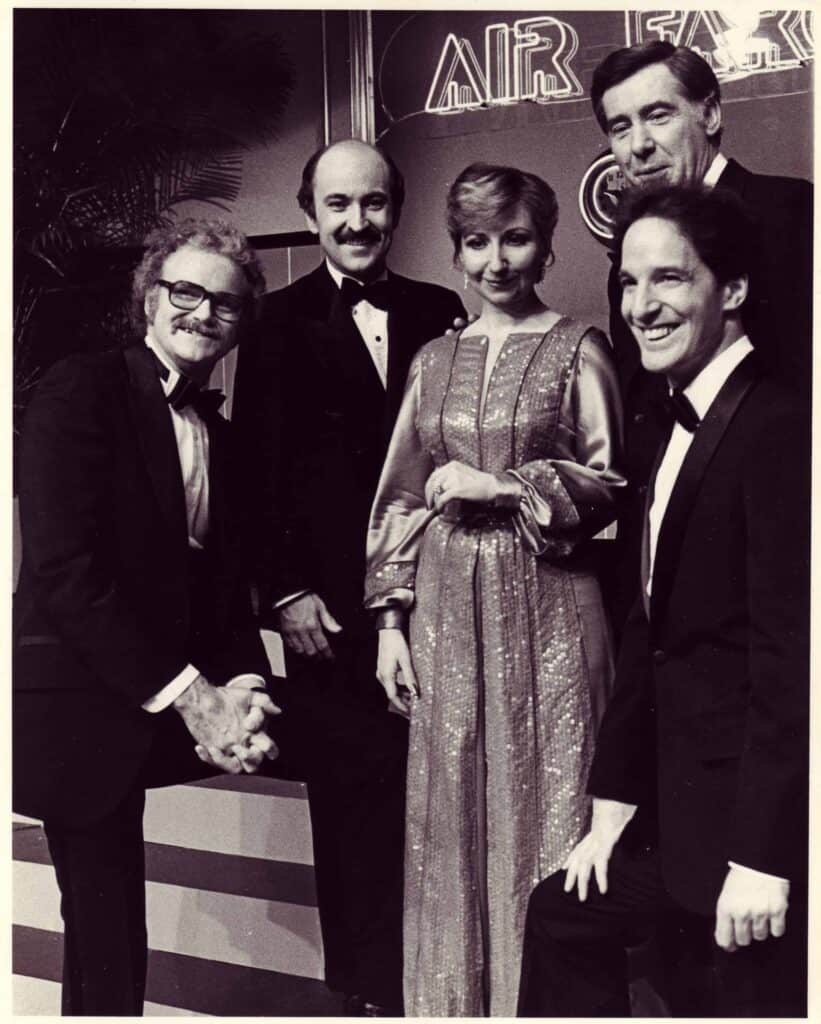 It’s 1970, and a handful of students and improvisers look at Canada and the world and decide they have something to say through humour. They called themselves the “Jest Society” (a spoof of then PM Trudeau’s “Just Society” campaign slogan) and their satirical improv revue was a hit.

At the time, they were: John Morgan, Martin Bronstein, Patrick Conlon, Gay Claitman and Roger Abbott.

The success of their humour landed them a long-term residency at the Poor Alex Theatre in Toronto. The move forced Patrick Conlon to resign, with Steve Whistance Smith filling in until Abbott’s high school friend Don Ferguson joined the cast.

The troupe was getting positive reviews and they were asked to do weekly sketches on the CBC radio show The Entertainers. They changed their name to the “Royal Canadian Air Farce,” when they were given their own radio show that ran for twenty-four years!

The first broadcast was December 9, 1973. The cast at that time: Roger Abbott, Luba Goy, John Morgan, Martin Bronstein, and Dave Broadfoot. Don Ferguson was a writer for the show. When Martin Bronstein decided to concentrate on journalism, he and Ferguson switched roles and Ferguson became a cast member.

They toured the country, hosting their radio broadcasts remotely from coast-to-coast. They developed iconic characters like Sgt. Renfrew of the Royal Canadian Mounted Police, Amy De la Pompa, as well as impressions of political leaders like Prime Ministers Trudeau and Mulroney.

Although they had exposure on TV as early as 1977 (as part of the six-part CBC series Crazy House with fellow Canadian comedy actors Billy Van and Harvey Atkin), it wasn’t until their 1992 New Year’s Special that their presence on TV was secured until 2008 a 16-year run, and the last few years were all filmed live.

On a veteran note, the Air Farce had two full time writers Gord Holtam and Rick Olsen who wrote for the Farce from 1977 – 2008.

Also, the producers of the U.S. network sitcom Taxi asked Abbott and Ferguson to write for the show, but they declined to stay in Canada with The Farce.

Dave Broadfoot went on to a tremendous stand-up comedy career and was inducted into the Canadian Comedy Hall of Fame in 2000. John Morgan retired in 2001.  Allan McFee was the show’s announcer on radio.

Guests on the show included: 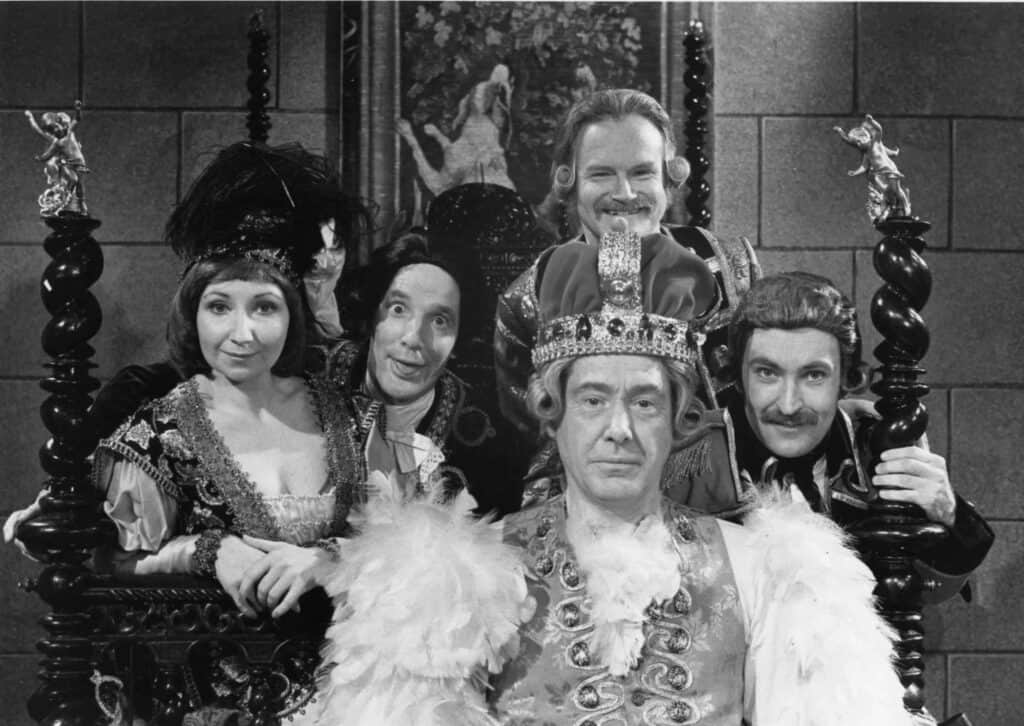 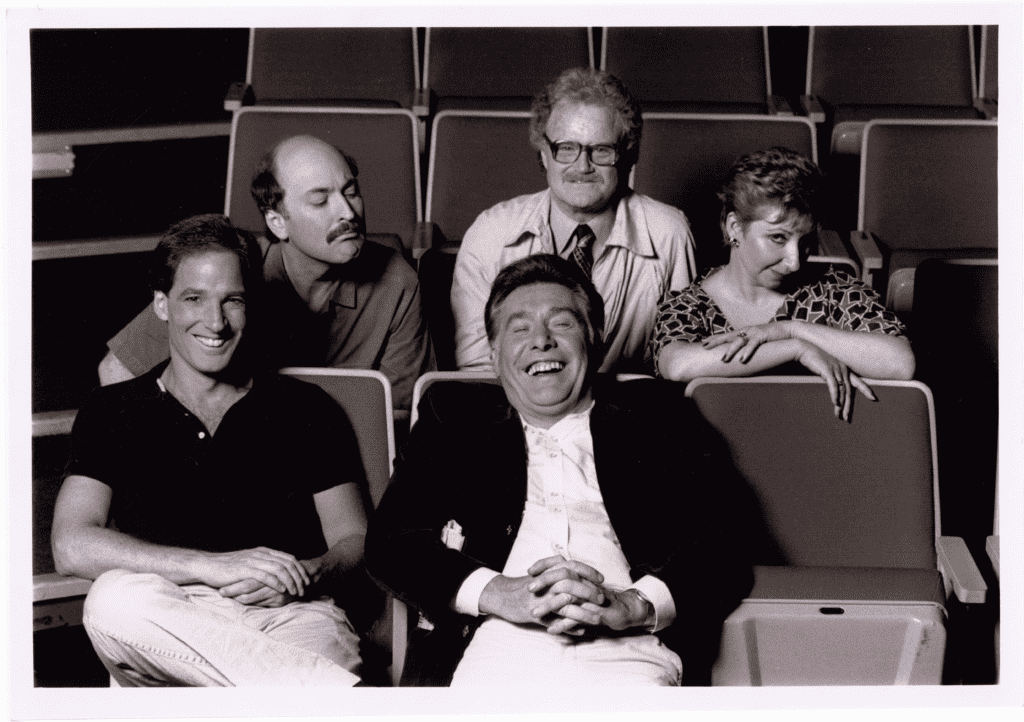